from Greek, historia , meaning inquiry;
knowledge acquired by investigation.
the study of past events
considered together

A History of Cannabis

Our complicated historical relationship with cannabis, and why that is beginning to change.

When it comes to our relationship to cannabis, one thing is certain: since the dawn of human civilization, there has been no plant that is so well-known, and yet so little understood. On both sides of the debate, misconceptions about cannabis persist. Anti-cannabis proponents have historically tied the plant to moral failings, overlooking its medicinal value and efficacy. On the other side, cannabis advocates have often argued that because it is a “natural” plant, it is not harmful in any way. Not only is this false but in actual fact many natural things can be extremely dangerous; take tobacco and alcohol as examples. These are both naturally occurring molecules which have changed the course of how we eat and live, and yet, they all have devastating consequences when used excessively or irresponsibly.

Cannabis is a ground-breaking plant, with an array of medicinal uses and the potential to help everyone, whether sick or healthy

But in order to understand why the misconceptions prevail, we must go back and understand how the plant has been characterised in recent history.

The Mysterious History of Cannabis

It’s important to note that prior to the 19th century, the only other term cannabis was referred to was hemp. During this period, the British government encouraged colonial farmers to produce hemp. This versatile plant was used for the production of rope, sails, clothing and paper, a fiber that was critical to the success of the British and Spanish empires.

In the US, hemp was the second largest agricultural commodity after cotton. In the 1700’s farmers were legally required to grow hemp as a staple crop. George Washington notably grew hemp on his estate, and early drafts of the Declaration of Independence were actually written on hemp paper.

Although cannabis had been a staple of traditional agriculture, and adopted for medicinal practices for millennia, the stigmatisation of cannabis can be traced back to the late 19th and early 20th centuries in Western culture.  Frankly speaking, since its entry into the US, cannabis had been associated with two groups of people that have historically given Americans a lot of trepidation – African-Americans (via Jazz culture in New Orleans) & Latin-Americans (i.e. Mexicans).  Cannabis starts to become a 20th century “social problem” when early reports in El Paso, Texas & New Orleans, Louisiana come out describing minority groups (namely Mexican’s & African-Americans) smoking cannabis.

After the Mexican Revolution of 1910, a wave of Mexican immigrants poured into the U.S. and helped popularise the recreational use of the drug.  Over the first three decades of this century,  what gradually occurs is that the name cannabis begins to shift in mainstream discourse, to a number of other names — weed, reefer, jive, herb & marijuana. 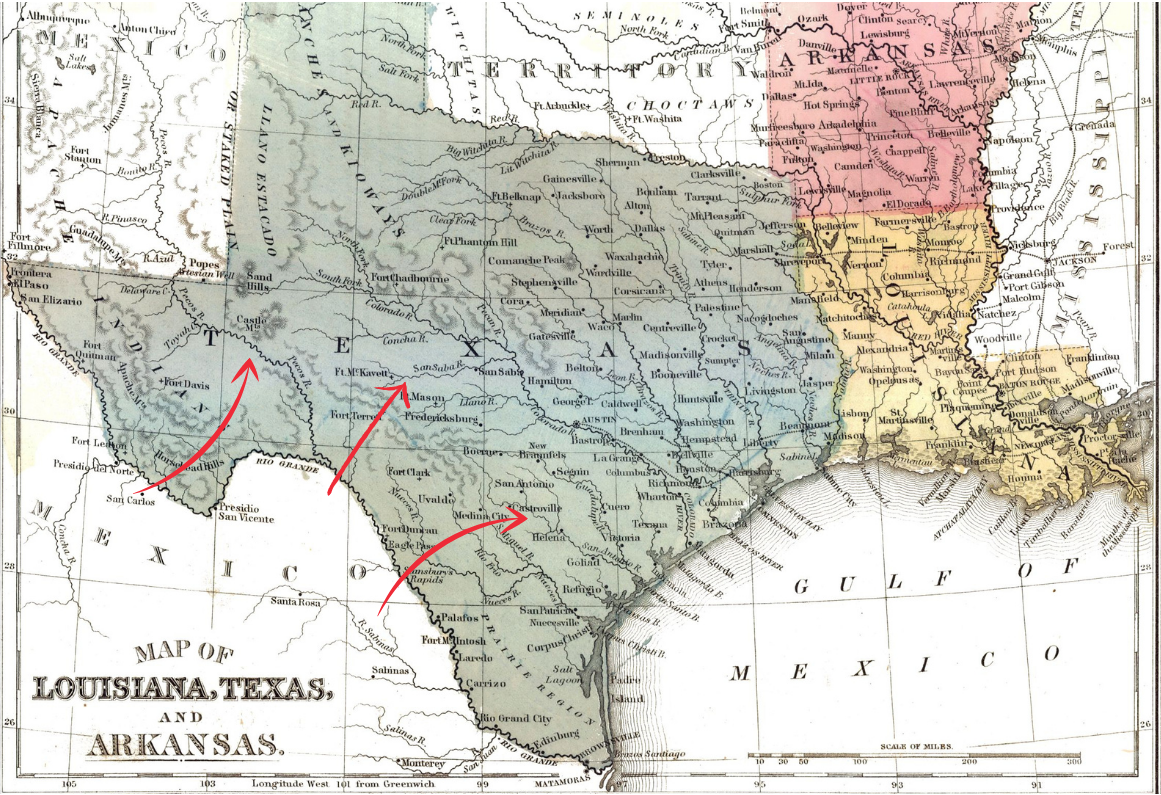 (Figure 1: a 20th century map of Texas, Louisiana and Arkansas. These were the first states that saw a mass migration of Mexican immigrants)

This period is one of the most xenophobic decades of American history – with the coming of Jews & Italians from overseas, Mexicans migrating from their native land, and the Great Migration of African-Americans from the deep south to northern cities. There is an immense shift in the urban population of America, and a ton of fear and anxiety accompanying this movement.

Within a few decades, cannabis becomes quickly associated with Mexicans & Blacks. Amongst the new terms that cannabis was often referred to in the mainstream, Marihuana (or Marijuana), became the most prevalent, in order to make the association with Mexican-ness. 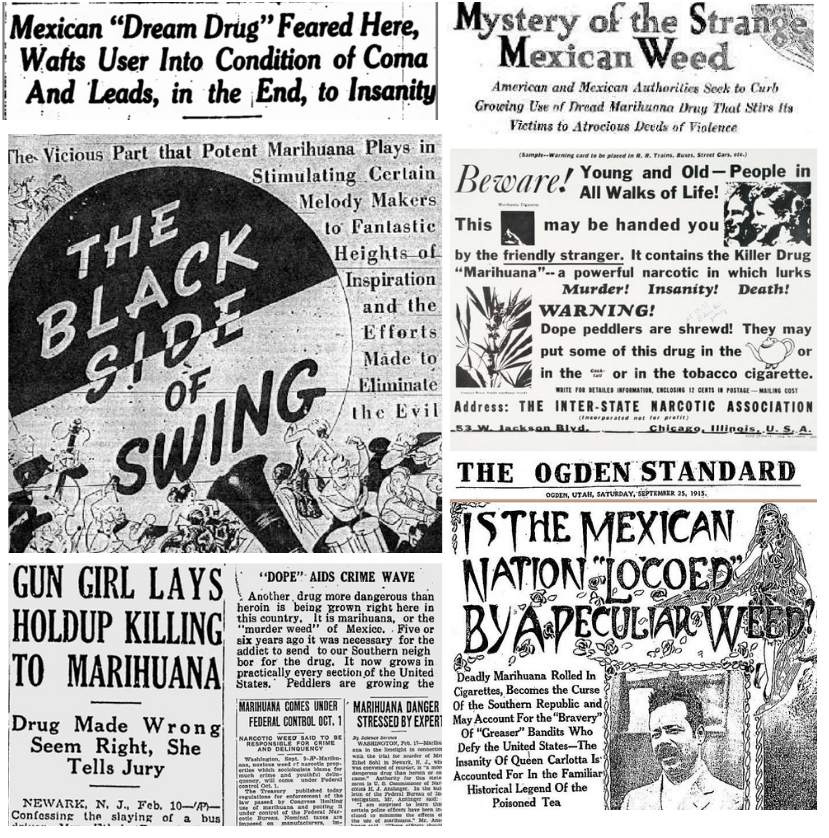 (Figure 2: a number of early 20th century US newspaper headlines that tied wildly inaccurate and unscientific claims about cannabis to Mexicans & African-Americans perpetuate cultural fears and social anxiety about these groups of individuals to win political acclaim and support for prohibition by anti-immigrant groups)

That’s the history in the U.S – what about the UK?

Across the Atlantic in Britain, the early stigmas towards cannabis relates to the expansion of British Colonies into new regions such as Southern Africa and the Far East. As part of the British colonial efforts, British elites embarked on a central mission. The aim was to learn everything possible about these regions, including their histories, languages and cultures in order to better understand – and thus control and exploit – these little-known territories. The consumption of cannabis was a normal part of many of these cultures, as was the case in India, where cannabis had been used for years for both ritualistic and medicinal practices. Accounts describing the use of cannabis during this time often centred on the assumed damaging mental health effects due to the psychoactive properties of high-THC strains.

British Colonials regarded the drug with suspicion. They feared that the plant could transform normal cognitive activity, by inducing a type of “madness”, 19th century colonists considered the use of cannabis a threat to colonial power. The concern was that this supposed exotic and mysterious plant they knew little about could disrupt their path towards colonisation.

Ultimately, Western scepticism towards cannabis was rooted in an anxiety and uncertainty towards populations of colour, concerns around the changing nature of urban populations, and the fears around cultural intermixing. These fears informed the discourse around cannabis, and the increase of cannabis propaganda which sparked widespread fear and the stigmatisation of cannabis at a social level. This period is also known as criminalisation of cannabis; a criminalisation unsupported by scientific evidence. The discourses influenced the measures that would be taken against people – predominantly of colour – who were consuming cannabis, culminating in the eventual prohibition of cannabis in the US and the UK in 1937 and 1928 respectively.

And finally, why the narrative around cannabis is changing

Scientific advancements continue to drive the movement towards a global legalisation of cannabis. The identification of the endocannabinoid system (ECS) and anandamide in the 1990s was a major breakthrough that led to a greater understanding of the interaction of cannabinoids – like CBD & THC – and the ECS of the human body. Today, we are able to safely detail the effectiveness of cannabis use in medicine, though that is not to say that risk factors do not exist. In the same breath, evidence shows there are at least two legal substances which cause greater detriment to health that are not stigmatised to the same degree as cannabis – alcohol and tobacco.

On a social level, society is evolving and attitudes are shifting. The online world has given us access to new streams of information that weren’t previously available and social media presents opportunities to be more interconnected than ever before. In the modern, digital age, there are ways we can stay informed that previously never existed. Public attitudes towards social issues are evolving and we have a greater acceptance towards allowing change to occur.

We are at a very unique moment in time in the history of cannabis. The stigma of a deviant, menacing substance is changing, and as a result we are seeing the gradual decriminalisation of cannabis happening before our very eyes. As our attention continues to shift to advancing medicine and the therapeutic benefits of the plant, how we can use cannabis to enhance our everyday lives is now becoming the main focus.

The new normal is already upon us.